When I was growing up, and I’m sure many other UK fans can back me up here, Halloween was always frowned upon, seen as a deviant, awful festival. Looked down upon by our elders. And true, the odd channel would put on some classic movies, but we clung to them madly because it meant, somewhere, in the midst of the TV scheduling department, we had a friend, another horror fan, who thought the same as us and was doing all they could to help us celebrate the festival, with what limited power/resources they had. So Carpenter’s Halloween would nearly always be on BBC2, alongside other classics for example (which was never a bad thing of course!).

Sure we had little gasps of excitement too, I remember Ghostwatch, the seminal BBC one-off by the talented Stephen Volk, and for my 10 year self, it completely rocked my world! TV was doing something big for Halloween and it was crazy and amazing. But then after all the controversy, all the spookiness, all the madness, it went back to being just another day again.

Going trick r’ treating was also seen as a nuisance too, a case of begging. An anti-social thing to do, while having pumpkins and such was allowed (as well as bobbing for apples), but you couldn’t put them in windows and such, although my folks would let me. I think what always went against us was the fact that a week later, we have Bonfire Night here (I know right, so a kid wearing a ghost costume asking for sweets is bad, but allowing them to mess with fire and sparkles is perfectly fine!). And that was always viewed as the superior event here and took the attention away.

If you walked down a street in the UK on October 31st (and this was certainly the case with my own), you’d never have known it was Halloween. No decorations in the windows, no major Halloween accessories in the big stores (it was more the independent shops that catered for it). All you’d be lucky to come across every now and again (and which always made me smile still), was a secluded and defiant pumpkin, glowing in saddened isolation on someone’s doorstep amongst the dead leaves of Autumn.

But then the internet came along and furthermore, social media, and we all connected, all us horror fans, from all countries, all walks of life, and we all started talking. And that was great! We talked about our favourite horror films, we had access to ones we’d never seen before through online DVD stores, and so much more! All the debates/topics/theories I’d desperately wanted to talk about with non horror fan friends suddenly had answers, accompanied by alternate points of view (like how did Jason bulk up mysteriously between part 2 & 3 etc etc…all important issues in horror fandom you know!?).

For my American/Canadian friends, you’ve had it so good on Halloween (and I’m determined to do the great day over there some time soon!). And lots of you are always shocked when I tell you about the childhood Halloween I had here (well lack of it). But this coming together in my opinion over the internet/social media, made us British lot sneak out of our shells more so to speak, as we saw how Halloween was celebrated over there. Over the last few years, it has been pushed further and further into the mainstream realm by UK fans here I believe, as we all celebrate it in lots of different ways now too, from scare mazes’, the customary fancy dress night out up various pub establishments, scare attractions, special cinema screenings while ALL the major shops have now joined the fun and stock loads of Halloween memorabilia (they suddenly realised how much they could make out of it!). Horror conventions are growing here too, and even trick r’ treating is on the rise. In the last few years alone, loads of ghouls and ghosties have come to the door for sweets, and it’s wonderful to see.

If I had the capacity to go back in time to visit my 6 year old self (seen below), and tell him, that in a couple more years, Halloween would be more celebrated, more accepted and more fun, he would have shrugged half-heartedly and gone back to checking the old TV schedules in the newspaper desperate for another re-run of Halloween, as this would be all he could have expected (he’d probably also ask why I have less hair on my head too, but that’s another story!) 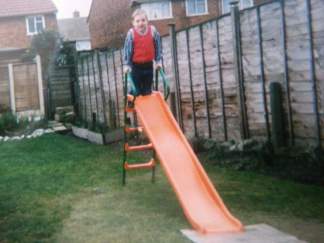 (Halloween/Autumn time, 1988, but you wouldn’t know that from the image though)

Halloween isn’t evil, it isn’t dark, it isn’t sinister, it isn’t about worshipping Satan (well, only for the true nutters anyway). It’s fun, it’s a laugh, it’s a time for playing jokes, playing pranks, being creative with costumes and pumpkin designs (even families come together to do those activities now! Who’d have thought it!?). And furthermore, for me, it’s like a massive horror family get-together every year, as we celebrate the season with fun traditions such as the 31 Days of Horror, where we all actively sit, digest, critique, watch and discuss the very films we all grew up on, the very films we all adore or disagree on, the very films that made us come together and be who we all are today. Horror Fans.

We’re not sadistic, we’re not weird, we’re definitely not psychotic, and certainly not a dodgy cult. We’re just normal everyday people who love a scare, a story, a continued/expanded mythology through continuity obsessed sequels, a good Blu Ray/DVD bargain in the horror section (which used to be deserted!), and a good special effect. And I think the internet and especially social media has helped show that more and more and allowed us UK fans at least, the opportunity to step out of the shadows and finally give the Halloween season a delightfully ghoulish welcome to these shores (at least lead the way). True, we do watch these films all year round of course, but like Christmas, we all come together more so in October. And I always love it. I’ve met so many wonderful, kind and downright hilarious friends through the world of horror and I’d change that for no-one.

As someone once said…

Ain’t that the truth indeed!