It’s been just over a month since we filmed GRID and it’s now in post production, but people have been very interested in the project and we have some exciting things to announce about it in the near future, but enough about that for now, at the moment I would like to share some reflections on the making of the film from some of the very talented and fantastic actors who you will see on screen in the finished product. And my goodness, were they amazing!

To give you some context beforehand, here is the synopsis;

Set in the mid 1980s, the virus that would eventually be known worldwide as AIDS, has already struck fear into the medical profession as well as the LGBTQ community.

As large numbers of this populace are being unmercifully struck down by this horrid and mysterious/insidious killer virus, in one hospital there remains hope. As Angie Wordsworth (Charlie Clarke), a cover nurse, meets Daniel Cole (Steven Salt), a patient who has been cruelly afflicted with the virus and who has had no-one but Doctor Andrews (Ernest Vernon), to care for him, having being abandoned and left with nothing but his ever diminishing memories.

As Angie and Daniel, two complete strangers, comprehend their situation together, a bond is lovingly formed between patient and carer, no matter what the consequences and without prejudice. A bond that will prove, that in our darkest moments, humanity & love, will always find a way to shine through.

How did you get involved with the project initially? I was introduced to the team through House of the Screaming Death having been cast in for a minor role as Lawrence and from that, Dave expressed a desire to collaborate again and he asked me would I be interested in a short film and the process snowballed from there.

What were your first reactions to the script?  My first reaction was that this was going to be very hard so I suppose subconsciously I accepted the role before I finished reading. I was struck by the weight of the script and the themes of equality and humility came out easily for me.

The film deals with the initial years of the AIDS epidemic when not much was known about the virus. Do you think it is important to tackle this in the medium of film? I think it is very important to tackle. It’s an area which I knew very little about and it was challenging to face the stigmas and social connotations and hold them to account. It has to be relevant if we see it in our society right now still as well. 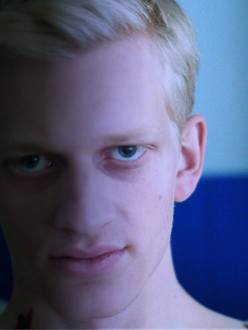 Was it challenging for you as an actor & did you feel any responsibility in taking on the role? Of course it’s a huge weight to carry because you’re representing something so important to many people. I found the best way to handle that was to focus on Daniel and his unique and tragic experiences that kept the water clear.

What should people expect from the final film? Good question! I’m probably the wrong person to ask, yet I hope the themes I mentioned earlier shine through and that audiences have an experience that broadens their minds/horizons after watching the film. Allowing them a very emotional insight into a terribly upsetting time for the LGBTQ community; allowing them to be more accepting of others. I also hope that it shows that love comes in all forms, no matter what, and the hope that was also there at the time, still continues to this day as the fight against AIDS goes on.

How did you get involved with the project initially? I had previously worked with the team on the feature “House of Screaming Death” as a small supporting role and had kept in touch with them, hoping to work on more with them in the future. Dave contacted me about the script and I said yes to it, I had such a good experience working with them the first time it was an honour to be asked back for this project.

What were your first reactions to the script? Honestly, I cried. In a good way! Right from the word go you could tell this script had been written with care and a connection to the subject matter. It was beautifully written and I showed it to my other half Liam, who is also a filmmaker (owner of SuperfreakMedia), and he told me I just had to do it. I fell in love with the character of Angie and felt a connection to her and where she goes within the story. 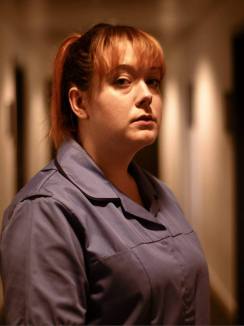 The film deals with the initial years of the AIDS epidemic when not much was known about the virus. Do you think it is important to tackle this in the medium of film? I think film and art is reflective of the world around it and although the world has made a lot of advancements in understanding the AIDS virus, I don’t necessarily think we have made the same strides in the acceptance of the LGBTQ community. In many places around the world LGBTQ people are accepted with open arms, but equally there are places where people are killed simply for being themselves, just look at the Orlando shootings – I believe that film is an important tool in discussing these issues and that it prompts people to think. Regardless of an audience’s background, film is something that is so accessible and for me as an actor if you can create an emotional response in the audience you have done your job right! Although GRID is set in the 1980s I still think the themes of the treatment of the LGBTQ community are still very relevant today and I hope the audience will take something away from this film.

What should people expect from the final film? It was a very emotional shoot for the whole cast and crew so I expect tissues may be needed when watching it! But more importantly I think the crew behind this project are amazing, as I said the script has been written with great care, so people should expect a moving piece that will be beautifully put together by a great team. I really hope this film will go far as so many people have worked so hard on it!

(Charlie and Steve between takes on the set)