Rehearsals began today on the third segment in the HOSD with actors Brett Dewsbury and Ernest Vernon running through a key scene that any classic Hammer Horror fan will be familiar with! As Ernest’s Innkeeper character warns Brett/Thomas of the figure that haunts the nearby woods.

While rehearsals were going on with me directing, the rest of the production team were busy turning the rest of the base into a workable office and eventual greenroom, placing calendars on the wall, dates, actor headshots and other information needed by the team! And most important, sorting out the kettle for TEA! 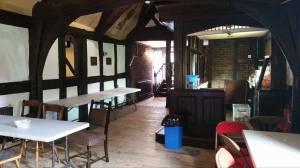 As well as this, certain locations within the Manor House are now slowly being set up for other key scenes not just in The Vampyre segment, but for the other terrifying tales you will see when the film is complete!

Checking In returns home to Walsall this July as part of the first annual Walsall Arts Festival. This is a wonderful honour and the whole creative team and cast are thrilled!

The film will be screened at The Fountain Pub at 8pm on Monday 20th July. So come along and meet some of the crew and cast and help support local filmmakers.

The latest exclusive mini prequel is a prelude to the final tale in the film, showing the deadly and horrific ritual used to summon The Diabolique… and what happens to anyone who attempts it.

Martine, Sam and Frederick will all encounter this in the future…at Bray Manor aka The House of Screaming Death.

Don’t forget to help us on Indiegogo to see how.

After an extensive round of auditions that had so many talented folks turn up (who are all part of the cast now!), the role of Thomas Burlington went to the very talented Brett Dewsbury whose audition showed so many sides that can be attributed equally to Thomas.

Set in 1888 (there’s a specific reason for that too if you’re a history buff!), a small English village and its community were terrorised a year before by a supernatural terrifying figure. The “figure with the claws”.

This menace rampaged through the community spilling blood until a band of men set off into the woods to stop it once and for all (see The Vampyre prequel). But they never returned. And even though this creature has never been seen since, the community still live in fear that while it was restrained, it was but temporary and it will return one day soon to reek revenge.

Into this midst comes Thomas, an outsider, visiting Bray Manor on business. And while Father Malone does his best to accommodate Thomas, the locals look upon this new stranger with suspicion. Especially as gruesome murders begin to start up again…

I am so glad we have Brett onboard! He is a dedicated, skilled and very talented actor who will be able to bring out the range of extremely conflicting emotions the script asks for! And what better way to Introduce him, than in his costume & in a brief video interview!

Welcome to the nut house Brett! And don’t forget the Indiegogo campaign folks

This is just SOME of what we have been working on so far to bring you the special mini prequels of Screaming Death.

The main event is yet to come and we need YOU to help us. The House of Screaming Death is currently crowd-funding on Indiegogo, If you can donate just a £1 then please, please, please, please do at –
http://igg.me/at/ScreamingDeath/

and if not then why not follow us on –

Very exciting times, as the Indiegogo campaign storms ahead, we are hard at work still behind the scenes with a host of pre-production still going on! This last weekend has been great, as we held a script read through with some of the production team, noting down aspects still needing attention such as props, costumes and how to get certain FX sequences to work! 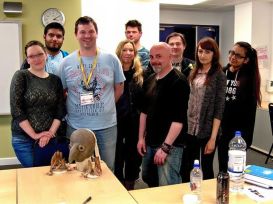 As well as this, the Sunday afternoon we then spent down at the Manor House location doing more location recce as well as filming more interviews and footage for the second episode of The Blog of Screaming Death with presenter Roger David Francis. You can see the second instalment below as well as a few behind the scenes pictures!

Hosted by Roger Francis, this instalment visits our wonderfull main shooting location and includes an interview with writer/director Troy Dennison. Don’t forget our Indiegogo too! 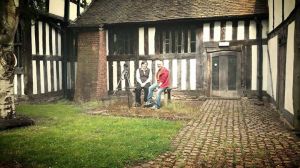 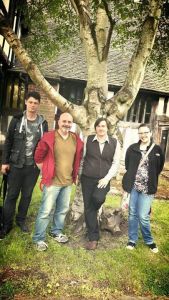 The latest & chilling exclusive mini prequel to the third tale in The House of Screaming Death – The Vampyre.

England, 1887. A small community has been subject to a string of horrific killings, all inflicted by “the sinister figure with claws”… As the killings increase, some of the villagers form a search party in an attempt to stop this creature… but some things should be left alone….

Don’t forget to help us on Indiegogo to see what happens next.